Ministry of Trade of The Republic of Indonesia 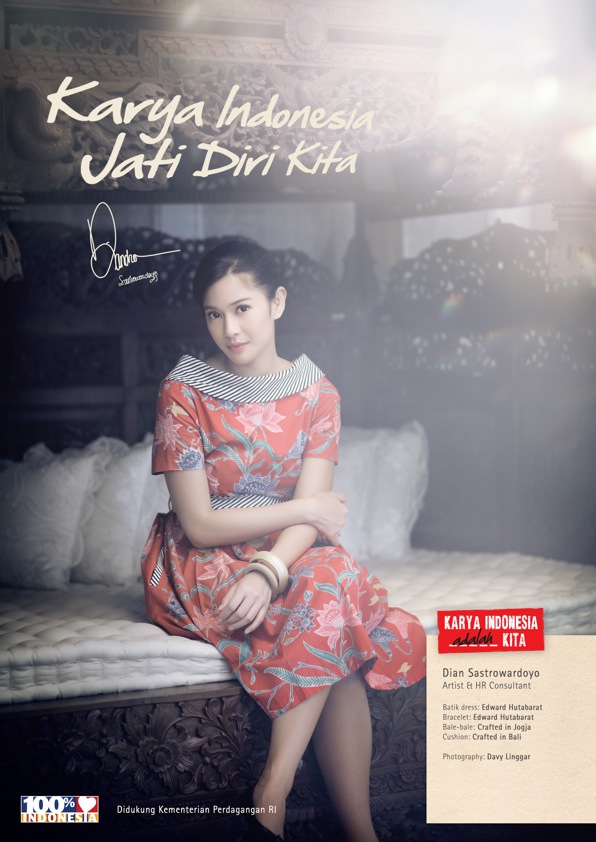 In Q3 2010, Minister of Trade of the Republic of Indonesia Mrs. Mari Elka Pangestu planned to launch campaigns to endorse appreciations to national products. To differentiate the campaign from other national products endorsing campaigns by the Minister of Trade, a different approach was chosen. Instead of only highlighting traditional products, this government-supported campaign for the first time ever highlighting the urban modern communities.“Adalah Kita” campaign

This strategy was chosen to attract the urban community whose buying power and modern lifestyle were believed could aspire wider public to appreciate Indonesia’s products and/or services. By highlighting these aspiring urban people, this strategy would close the perceived gap between urban modern communities with nationalism spirit. This campaign was designed also as an acknowledgment that the urban contemporary arts and cultures were indeed part of Indonesian arts and cultures.

To attract the targeted urban modern communities, selected aspiring endorsers from several professions were selected. Each of them had proven their achievements in their fields. Some of them were actually not broadly well known or publicly popular but were respectable figures in their fields. Combined with several well-known celebrities, this unique combination of endorsers well presented the urban appeals of the campaign.

“Karya Indonesia Adalah Kita” theme was created. The words stand for “Indonesia’s work (Karya Indonesia) are us/ our works (Adalah Kita)”, or can also be translated as “We (as a nation) are what we create”. This theme was chosen to communicate the concept of Whatever we do in our daily life actually contribute to the pride of the nation. Because for every our achievement, every our masterpiece, actually is the achievement of all of us as one nation. And now is the right time to appreciate the achievements of Indonesians who have created outstanding works, by proudly using Indonesian products/ services.

These aspiring figures were selected as the campaign’s endorser:

Dian Sastrowardoyo: One of the most famous Indonesian actresses. Her natural Indonesian beauty, diva charm and intellectual appeals (she was graduated from one of the best universities in Indonesia) put her as one most respectable yet admired actress. Her other profession as an HR consultant further strengthening her imagery as “beauty with brain” idol.

Leonard Theosabrata: Now recognized as one of Asia’s top product and interior designers, the only Indonesian to be included in the hefty 2006 German publication Young Asian Designers. He has won several prestigious international awards, including red dot design awards.

Avianty Armand: A female architect that become a reputable fiction writer. Her fictions are loved by literature enthusiast and well appreciated by the critics.

Endah N Rhesa: Endah Widiastuti (vocal, guitar) and Rhesa Aditya (bass), a musical duo that distributed their music independently. Their minimalist acoustic format has been well received in Indonesia’s music scene despite their limited channel of distributions and copies. “Our music is sincere and it’s coming from inside our hearts,” they say.

Kleting: Kleting Titis Wigati, owner and designer of “Klé”, is one of the rising stars in the fashion design industry. Hard Rock FM Jakarta named her “Most Inspiring People Under 30 Years Old” in 2008.

Sir Dandy: or also known as “Acong” is one of few urban artists with a broad range of talents, interests, and passions. Contemporary art collectors admired his acrylic paintings. His experiments with furniture products and indie music keep him stands out, exposing his pure passion for creative explorations.

Anton Wirjono: One of the most famous and respectable DJs in Indonesia. He is also an innovative entrepreneur who owns a wide range of music & retail entertainment industry brands. He was chosen by MTV Trax Magazine in 2002 as one of ten people with a Midas touch in entertainment in Indonesia.

Adella & Alleta: Twin ballerinas, both of them share the same passion for ballet since they were kids. Considered as the top ballerina in the nation, they were also well known for their effort to combine traditional Indonesian dancing with ballet in their shows.

Eugene Panji: Respectable video clip, film, and commercial director in Indonesia. His legendary works for several famous musicians brought him a reputable position as one of the most admired creative workers in the nation. Eugene Panji was also the director of this campaign TV commercial.

Davy Linggar: Reputable contemporary art painters, but more widely known as one of the best photographers in Indonesia. He was truly gifted with sophisticated aesthetic sense, which brought him to become the most desired photographers for top fashion designers in the country.

This unique combination of people, some were never imaginable to even talk about nationalism, were featured in 2 versions of the TV commercials.

The first version with 60 seconds duration featuring several of the endorsers in their daily activities setting, singing in their own voice the national song “Tanah Airku” (My homeland) composed by Ibu Sud (Renowned Indonesian pre-independent song composer).

The second version was 120 seconds version, consisting of an unscripted interview with the endorsers, talking about their point of view regarding nationalism and how Indonesian perceived Indonesia’s products/ services. The unscripted interview reveals a lot of unexpected angles from each endorser, which enriches the overall campaign with fresh ideas and perspectives.